Due to Chaminade's classes being online until January 31, the library will have modified hours of operation at the beginning of the 2022 spring semester.

In observance of Martin Luther King Jr. Day, the library will be closed on Monday, January 17. It will re-open on Tuesday, January 18 at 8:15AM.

Posted by CUH Librarians at 12:05 AM No comments: 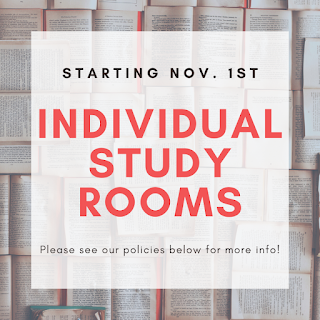 Beginning Monday, November 1, Study Rooms 3 & 4 may be utilized for individual use. Previously, all of the study rooms required at least two people and they were only for group use. This is a pilot program that will be carried out until the end of the semester and, upon review, may continue if it is deemed practical and effective. Groups will still be given preference, but if the rooms are not being used, individuals may use these designated rooms. These rooms are for a 3-hour loan period per day, on a first-come basis, and are not renewable.

Posted by CUH Librarians at 11:05 AM No comments:

In accordance with the University's policy regarding visitors to the CUH campus, non-CUH users of the Library will be required to present appropriate documentation and sign in at the Circulation Desk upon entering the Library (sign in only once per day). 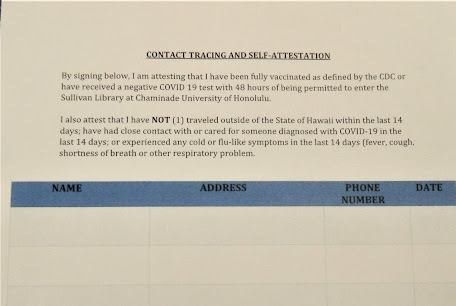 Here is the University's policy on visitors to the campus, also available at https://chaminade.edu/coronavirus/announcements/:
SAFETY PROTOCOL for CHAMINADE UNIVERSITY VISITORS
Effective September 24, 2021
In our continued effort to maintain the health and safety of our campus community, individuals planning to visit campus are required to present one of the following prior or immediately upon arrival to Chaminade University’s campus. The University faculty or staff member hosting the visitors(s) is responsible for the authentication of one of the approved forms of documentation.
QR code from State of Hawaii’s Safe Access program
COVID-19 Vaccination Card
Negative test result for COVID-19 within 48 hours of arrival
Examples of a campus visit include speakers, guests or individuals spending ten or more minutes indoors with Chaminade students, faculty and/or staff.
Posted by CUH Librarians at 7:55 AM No comments:

The Sullivan Family Library is aware of its webpage’s security error message and is working to resolve this issue. The library would like to reassure everyone that it is safe to proceed to its webpage and it does have a security certificate. The error messages may appear differently, depending on the browser used to access the webpage. Some may require the user to click on the ‘Advanced’ button before getting to the ‘Proceed’ message (see screenshot below).  If there are any further concerns or questions, please contact the library at (808) 735-4725 or at library@chaminade.edu for assistance. 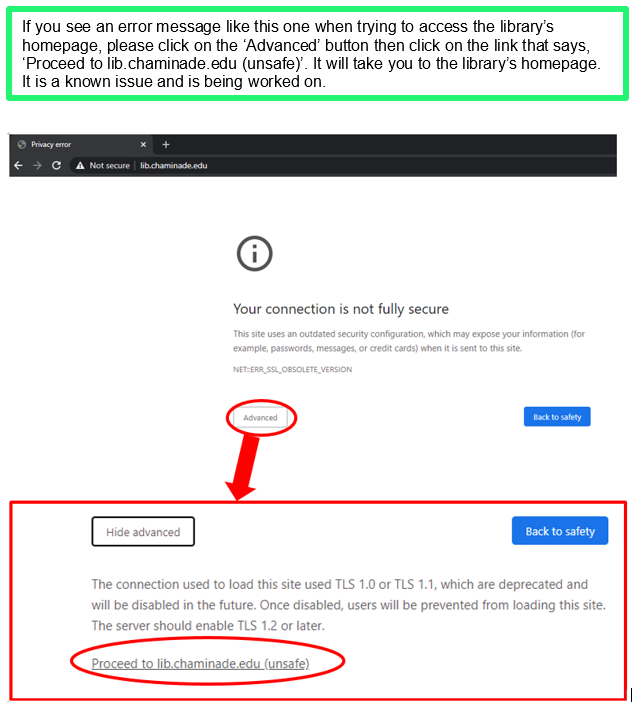 Posted by CUH Librarians at 8:00 AM No comments:


Posted by CUH Librarians at 6:32 PM No comments:

In observance of the Thanksgiving holiday, the library will be closed Thursday-Friday, Nov. 25-26, 2021. It will reopen on Saturday, Nov. 27 at 11:00AM. Have a safe and happy Thanksgiving!

Posted by CUH Librarians at 7:40 AM No comments:

Graduation can be a stressful time. Many options loom over your head but hopefully these resources can help you prepare for your next adventure!

"Presentation skills for students is a practical, accessible guide for all students in further or higher education. It discusses speaking effectively in seminars, tutorials and formal presentations and helps with career research including a practical step-by-step guide to a successful job interview... includes new material in the job search and job interviews chapter; highlights the hazards of using social networking sites; includes illustrations, which add both clarity and humor." -- from publisher

"Examines 202 of the most common and difficulty interview questions asked of candidates. Analyzes each question and offers sample answers along with useful checklists of do's and don'ts. Explains what type of answers interviewers look for when they ask a particular question. Each question is followed by a mini quiz to help readers better understand the best answers to formulate. The perfect guide for quickly preparing answers to anticipated job interview questions." -- from publisher

"...With answers to hundreds of questions, every page is packed with tips and tactics that will work for you at any job interview. You'll learn how to follow up effectively and negotiate the best possible job offers, and you'll also get 100 questions to ask that help you evaluate both the job offer and your potential new boss. With no fillers and never a word wasted, Knock ʻem dead job interviews shows you how to turn job interviews into job offers and paychecks." -- from publisher

Posted by CUH Librarians at 5:05 PM No comments:

Ready for a fun and challenging winter reading list to build your science knowledge? Take our Winter Reading List challenge and be the life of all parties with you newly acquired fast facts and scientific stories.

"[Grant] takes us through a rogue's gallery that features faked creatures, paleontological trickery, false psychics, and miracles cures that aren't so miraculous. See how ideology, religion, and politics have imposed themselves on science throughout history, from the Catholic Church's influence on cosmology to Nazi racist pseudoscience to the Bush Administration's attempt to deny climate change. The themes, while entertaining as ever, are serious and timely." -- from publisher

"Whether it's a bout of bad jet lag or a stress-induced all-nighter, we've all suffered from nights that left us feeling less than well-rested. But for some people, getting a bad night's sleep isn't just an inconvenience: it's a nightmare. In Sleepyhead, science writer Henry Nicholls uses his own experiences with chronic narcolepsy as a gateway to better understanding the cryptic, curious, and relatively uncharted world of sleep disorders." -- from publisher

Numbers, R. L. (2015). Newton's apple and other myths about science. Harvard University Press.
"Newton's Apple debunks widespread belief that science advances when individual geniuses experience "Eureka!" moments and suddenly comprehend what those around them could never imagine. Science has always been a cooperative enterprise of dedicated, fallible human beings, for whom context, collaboration, and sheer good luck are essential elements of discovery." -- from Amazon.

"Evolution provides an in-depth account of evolution, one of the ultimate keystone theories in modern science. Ten experts survey how each of the Earth's major groups of living things diversified and evolved through time. Using visual features that make the story comprehensible, the book gives readers, even those with no previous knowledge of the topic, a clear understanding of evolution and how it brought us to the present day." -- from publisher

Roach, M. (2003). Stiff: the curious lives of human cadavers. W. W. Norton & Co.
"Stiff is an oddly compelling, often hilarious exploration of the strange lives of our bodies postmortem. For two thousands years, cadavers -- some willingly, some unwittingly -- have been involved in science's boldest strides and weirdest undertakings. In this fascinating account, Mary Roach visits the good deeds of cadavers over the centuries and tells the engrossing story of our bodies when we are no longer with them." -- from publisher

Posted by CUH Librarians at 8:29 AM No comments: